Thank you all so much for coming, 31 ran for Chiltern, 10 for Good Shepherd, 21 for Molesey Community Church, 6 for Christ Church New Malden, and 7 for Selsdon Baptist – 75 runners in total!

We had our pre run brief – covering scoring, thanking our volunteers Mimi our photographer, Jo our scorer, and Carol and Robert who handled all the last minute baggage people had not left in their cars.

Many had driven or come by train, at least some of the Christ Church group had run to Bushy!

Some were well rested, fresh, and keen – others had had 3 hours sleep after a late night out.

All of you were ready to parkrun.

The weather was lovely, and I think it’s fair to say spirits were high.

In all 1095 people ran, and we were spread from position 45 to position 1093! It was pretty crowded at the start – spot Holly in Molesey gold below 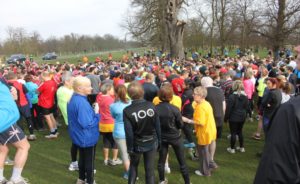 The Christ Church women (just 4 of them) picked up a staggering 23 points, the Molesey women (8 of them) 27 points, but the Chiltern men (39 points) and especially our juniors (47 points!) brought Chiltern home.

Scores, for those who like such things, as follows;

Next Mob match looks to be May 17th at Lloyd, so get that one into your calendar! Then July 19th at Roundshaw for those who plan ahead.

First women home for their teams otherwise were; Rachael Root SBC, Lisa Webster GS, and Karina Moore CCR. For the girls it was Eleanor Woodman GS.

Look closely Mark is ‘Blythely’ unaware Peter Bodley-Scott (and Harry) are about to overtake him!

Whether you were top of your age category, or not, what was brilliant to see was the determination and enthusiasm so many of you displayed – and of course how many of you were smiling! 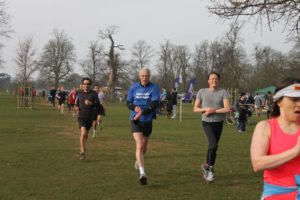 Matt Stone ready to stop his watch as he crosses the line.

The achievement awards that move on to a new runner after each mob match went to, Holly Vanstone 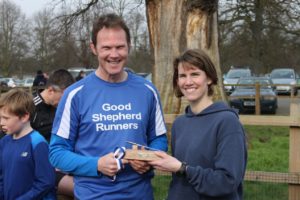 Other awards to Judith Kelly and Debbie McCarthy – newcomers. Harry Bodley-Scott – Awesome medal (he did cross the line ahead of his Dad!). Also an Awesome Medal for Rachael Root, see below;

Big congratulations to Nathan Dibdin today on his first parkrun back after a nasty RTA last year – under 25 minutes, classy return Nathan!

Nathan and his sister Mimi Dibdin – our fabulous photographer. 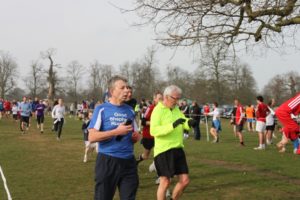 I have to say it was a really great morning for me, lots of friendship, fun, and we sure got noticed – 2 pages in the Bushy parkrun event news about us, and an enquiry from a local church about the event. I only hope you enjoyed it just as much as I did.

As I said before, the next mob match is Lloyd parkrun in Croydon – May 17th. It’s right on the tram line from East Croydon station – there’s a café, and lots of friendly folk – but be ready for some hills. Hope to see you there.

I’ve popped a few more of the photos onto the end – so enjoy. 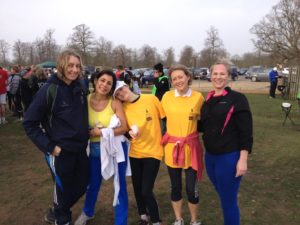 The Molesey Ladies at the end, including scorer Jo – all still looking fresh as a daisy. 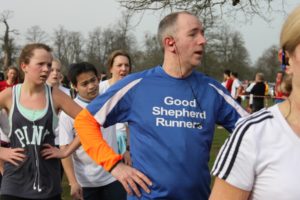 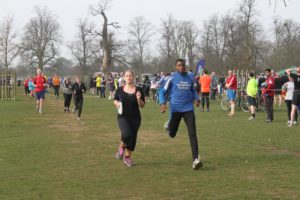 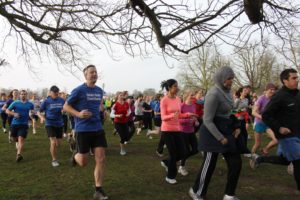