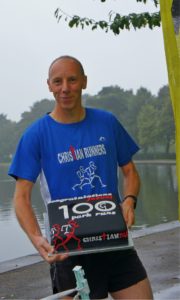 Jason, the founder of Christian Runners, has been a committed Christian since the age of 16 as well as a dedicated runner from about the same time. He currently attends Cutsyke Christian Church, Castleford, where he is a lively, active member. He has completed over 20 marathons (14 being London marathons!) and taken part in hundreds of other track and triathlon events. As of June 2014 he also holds the record for running the most “Winter Tough Guy Events” (21 and counting). Jason is also a coach and the longest serving member of his local running club, The Rothwell Harriers.

It is because of both these passions that Christian Runners was born. Jason was keen to encourage people to share their faith by wearing a recognisable running shirt, which if nothing else might invite questions and help us to share the Gospel with other people.

He states his “career highlight” as setting a world record for running the London Marathon dressed as a clown in 2008. No stranger to the limelight, he appeared on TV in “SAS – Are you tough enough?” and ”Deal or No Deal” with Noel Edmonds.

Jason is married to Joanne, has 5 children and a dog, Woody, who is his most reliable running partner. His occupation is School Site Manager for a large primary school in Leeds, West Yorkshire.

“But in your hearts revere Christ as Lord. Always be prepared to give an answer to everyone who asks you to give the reason for the hope that you have.” 1 Peter 3:15 NIV.