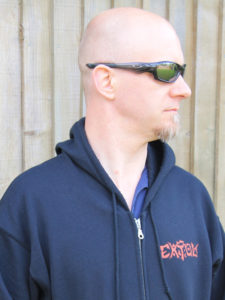 parkrun – Tail runner, because it’s great to chat with and encourage those at the back of the ‘pack’.

Junior parkrun – marshalling, because of the smiles the kids give you when you high five them.

What do you do at parkruns:

Mainly I run, occasionally when I run out of steam I walk (before resuming running again!). I have even been seen skipping (encouragement for my 7 year old daughter).

A 2016 new year’s resolution was to volunteer more at parkrun. I managed 13 volunteers in the end. It’s easy to underestimate the amount of work involved in organizing a parkrun!

How has parkrun changed your running:

I’ve become a ‘serious’ runner… to the point that my wife has complained about how many pairs of running shoes I have! I’m faster, fitter, and more open to regular distance running. Since my first parkrun in April 2014, I’ve upped distances, running a series of 10ks, then going for a series of trail runs, four half marathons, and I’ve entered the 2017 Brighton marathon! I honestly think that if I hadn’t discovered parkrun, none of this would have happened.

I love the community spirit, the words of encouragement to runners finding the going hard; the sense of achievement when PBs are set. The challenge of running with others, but racing myself! I love how many parkruns there are – and have developed a bit of a parkrun tourist bug, as I think it’s great to visit and enjoy other parkrun venues to my home run.

Most memorable or funniest parkrun moment:

Eastbourne, 21 November 2015: as we were called to order the sun was shining; as the run started the rain came, brought on by strong winds, the rain turned into sleet, then hail, then snow, before (just under 26 minutes after I started) finishing in glorious sunshine. I didn’t think it was possible to run through so many types of weather in such a short period of time! Was I kitted out for all conditions – yes, except I didn’t have a hat, and as I have a shaved head, the hailstones really hurt!

Editors note – whilst Chris doesn’t like to make a thing of it, see below for his special power!